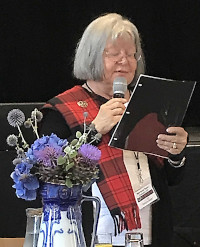 Many of these books are available in the Ewing Collection at the Allen County Public Library (ACPL), Fort Wayne, Indiana.

Many of the older books described below are also available at books.google.com, FamilySearch Digital Library, and www.archive.org, among other places. Copies of books also appear for sale from time to time on the Internet and may be found through Google or other searches.

This is a transcription of pages in this book that concern Ewings. The book was prepared in "obedience to a resolution of the General Assembly of 1886, that Presbyteries be requested to send two copies of their Histories to the ... Clerk of the General Assembly and to the Presbyterian Historical Society, respectively'." In addition to general historical information, the book contains "[a] history of woman's work in the Presbytery, a list of candidates, licentiates and administers, and the dates of their connection with the Presbytery as far as could be ascertained, and a few personal sketches." In the transcribed material there is particular attention to Hon. Nathanial Ewing, a scion of the Uniontown area in Fayette County, Pennsylvania, area.

A partial transcription is available through the link above. Virginia Ewing Okie has (as of July 2008) an original, bound copy of this book inscribed "Samuel Evans Ewing April 1889" on the inside cover. She prepared this transcription of selected, Ewing-related pages from her copy.  The full text (ebook viewer) is available at archive.org. Another copy (pdf) is available from Google Books.

This book concerns the family and descendants of William Ewing of Rockingham County, Virginia.

Du Bois, Robert Paterson
Record of the Family of Thomas Ewing, Who Emigrated from Ireland to America in 1718.
Self Published, Press of James H. Bryson. 1858.

"Thomas Ewing (1695-1748), son of Findley and Jane Ewing, was born in Londonderry, Ireland. Thomas immigrated to America in 1718 and settled in Long Island, New York. He married Mary Maskell (died 1784 ..." A footnote on pages 6-7 refers to four sons of James Ewing of Inch–John, Alexander, Henry and Samuel–who immigrated to America "[a]bout the year 1700" and gives an argument that they "were the brothers above alluded to" in the text of the manuscript.

An electronic copy may be viewed and downloaded from the FamilySearch Digital Library. Click this link and then search for Thomas Ewing. A copy of this book is also in the library of the Historical Society of Pennsylvania in Philadelphia. A softcover reprint is available from Higginson Book Company for approximately $10 (9/2021).

"This sketch treats ... some of the American Ewing families which are descended from ancient Clan Ewing of Scotland. Bearing a similar name, there were other early clans of that country in no way connected with or related to our clan, such as the McEwens, the Ewens; and probably in later times some of their descendants came to spell the name Ewing, though not related to or descended from the clan from which I trace the families of which I here specially write."

Available online on this web site; click on the link to the right of the title. A printed copy should be available at ACPL. Printed copies are available from Higginson Book Company for approximately $69 (9/2011). A (23 mb) PDF electronic copy may be downloaded, for free, from American Libraries.

Ewing, Evelyn and Jim
The Ewings of Frederick County, Virginia (link)
Self Published. 1986.

This book focuses on: "John Ewing, the first ancestor known of this family, [who] was of [Carnashannagh], parish of Fahan, Donegal County, Ireland.;" "William Ewing ([son of] John) was born 1711 in Carnshanagh, Ireland, to John and Janet McElvaney Ewing. With his family, William came to Pennsylvania in 1729, and in April 1737, William moved down from Pennsylvania just six years after settlement began.;" and "Samuel Ewing ([son of] William, [son of] John) was born February 28, 1767 to William and Elizabeth Ewing. Samuel ... was the sixth child and the fourth son. Samuel married Barbara Shipe November 10, 1789."

A narrative description of the life and times of the paternal and maternal ancestors of George Douglas Ewing who was born in 1842. The coverage extends back two generations. On the paternal side, this leads to James Ewing (ca 1777-1833/34).

"The chief object of our effort is to compile a trustworthy record of so much of the Ewing family or families since early in the eighteenth century, as will disclose to those among whom our book may circulate, an intelligent account of those ancestral lines which trace back to the original Scotch-Irish stock. To accomplish our purpose we shall be obliged to come down from two starting points, the one in the union of Findley Ewing and Jane Porter of Londonderry, Ireland, in the year 1690, the other in the union of William Ewing and Eleanor Thompson of Pennsylvania, prior to the Revolutionary War, or about 1765. The reason for tracing these two particular family lines is their meeting in the marriage of James Henry Ewing of the second part of this volume to Eleanor Jane Rhea of the first in the year 1852."

Available on-line on this web site; click on the link above. Printed copies are available from Higginson Book Company for approximately $37 (9/2011).

Ewing, Milam Myrl
Edley Ewing, The Texas Pioneer and His Descendants
Self Published. 1979.

James Ewing of Pocahontas was one of the Immigrants who came to America before 1776. It is believed that he was born circa 1721, possibly in the Scottish Highlands but more likely in the Ulster region of Ireland. He emigrated to American prior to 1747, entering either through a Pennsylvania/Maryland port or a port in North Carolina. He died in 1801 near Warm Springs, Bath County, Virginia.

This book concerns the origin and early history of the Ewings and their different branches America. The coverage includes Thomas and Finley Ewing, James Ewin, Nathaniel Ewing, William Ewing, and Charles and Robert Ewing.

Ewing, Vernon T.
From Whence We Came: Ancestors and Descendants of Gustavus H. Ewing, with Kindred Branches of the Ewing Families
Self Published (Mustang, Oklahoma) 1985

Alexander Ewing (1679/1680-1728) immigrated from Scotland to Ireland, where most of his family were born, and then to Cecil County, Maryland. Gustavus H. Ewing (1853-1894), direct descendant, married Irene Samantha Williams in 1873, and moved from Tennessee to DeKalb County, Texas. Descendants and relatives of Alexander lived in Maryland, Virginia, Kentucky, Tennessee, Mississippi, Texas, Oklahoma and elsewhere. Includes some family history in Scotland. Also includes information about Barkley, Byrd, Kincaid, McNeil, Porter, Rice and related families.

"The Ewings, who were Scotch, are said to have been divided some time in the Twelfth Century into two Clans, one attaching themselves to the fortunes of the Gordons and the other to those of the Campbells. The former espoused the cause of King James, and on his accession to the throne of England in 1605 followed him when he finally went to London, and, of course, having been with him in adversity, shared his prosperity. The latter, on the contrary, suffered persecution and adversity, being compelled finally to flee from their old home near Stirling Castle. They sought refuge for a time on the Isle of Bute, and from there drifted over to [the] North of Ireland, settling in the neighborhood of Coleraine and Londonderry, in Londonderry County. It is of this latter branch or clan that I wish principally to speak; for from them sprang the major portion of the Ewings, now scattered from one end [to] the other of the United States of America ..."

Ewing, W. Francis
From Edentown to Bethlehem
Self Published. n.d.

"This Manuscript is a Work or Study whereby I [Margaret Ewing Fife] present a few early EWINGs out of all those who have not, heretofore, been documented. I also present changes to some Genealogies already in print which are indicated by additional findings."

"The Robert Ewing family is the first family discussed. ... three children have been identified for him [the third being Alexander b. 1676/7.] A daughter Margaret Ewing married Josiah Porter. Their daughter Rachel Porter married Nathaniel Ewing. A son, James Porter, of Margaret and Josiah came to the colonies and married here. Three of his daughters married into the Ewing family. Although the book is primarily about the descendants of Alexander Ewing, a chapter is devoted to William Ewing, the father of Nathaniel."

Available on-line on this web site; click on the link above. Printed copies are available from Higginson Book Company for approximately $107 (9/2011).