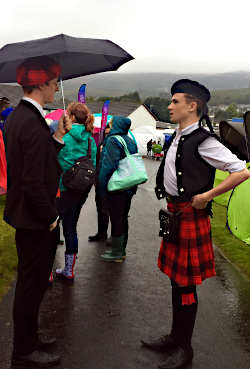 The Allen County Public Library (ACPL) at Fort Wayne, Indiana has accepted the bulk of the records previously kept by the Ewing Family Association at the Cecil County (Md) Historical Society. ACPL makes this material available online through its Genealogy Center Family Files and Resources area.  You may explore the Ewing area at http://www.genealogycenter.info/search_ewing.php.  ACPL will welcome researchers in person who would like to view the original documents including those that may not yet have been indexed or made available on line.

Also see our archive of documents on this web site.

A short clan history prepared by Stephen Robert Ewing. "For an alternate history of the Ewing name (MacEwen) check out the Clan MacLachlan Web Site."

In 2014, the ancient Scottish Clan Ewing was revived by formal action of the Lord Lyon Court, with Thor Ewing as Commander.  The Clan and the Ewing Family Association enjoy a close relationship.

"Very little is known of the earliest Ewings, although it is clear that James Ewing emigrated to America from northern Ireland in about 1740, probably at the age of 18 or 20. Possibly he was born in northern Ireland, or ..." This Web Site also provides extensive information on "Swago Bill" William Ewing (1745-1822) son of James Ewing of Pocahontas.

For additional information on James Ewing of Pocahontas, click here.

Provided by the University of Pennsylvania.

"A website devoted to the descendants of Thomas Ewing Sr. ... who immigrated from Northern Ireland to Southampton, Long Island in 1718."

"Nathaniel Ewing ... was a farmer who settled in Cecil county, Md., and reared a family of eight sons, one of whom was George Ewing. William Ewing, a son of George, came to Fayette county, Penn., toward the close of the last century. He was married to a Miss Nancy Conwell who bore him children as follows ..."

Provided by the "Beer's Biographical Project".