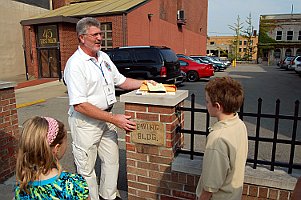 I am saddened to report that Bill Riddle died in a Santa Fe hospital on Friday, September 26.  He fell a week ago today and injured his neck.  He had surgery on Tuesday to relieve the trauma, but failed to recover.  His daughter Jeanette said he died peacefully, surrounded by family, who were comforted knowing that Bill had a full and productive life.  His multiple contributions to the EFA are beyond count.  A service was held Friday night for the family, and another service will be offered this evening for Bill's friends in and around Santa Fe.  Jeanette suggested donations be made in Bill's name to the Multiple Sclerosis Foundation in lieu of flowers.

He already is missed in so many ways.
From David Neal Ewing, Past EFA Chancellor:
Wally is right when he says that Bill's contributions to the Ewing Family Association are "beyond count," but I want to enumerate at least some of them. Before Bill retired, he was a college professor of information technology. Afterwards he continued to work as a consultant on hugely complex corporate websites, and for the last ten years or so he volunteered hundreds upon hundreds of hours of this expertise and experience to the EFA. I would not be surprised to learn that Bill contributed more volunteer hours to the EFA than all of the rest of us put together.


This is certainly not a comprehensive list. Bill was my cousin (well--fifth cousin, twice removed), my teacher and my friend. His support and counsel was crucial during my tenure as chancellor. Karen Avery has told us that this was also true for her and I have an idea that is true for many others in the EFA. Maybe this quiet support was the most important of his accomplishments. We will all miss him sorely.